iTunes & Kobo Banned Rude purchase those formats from ARE:  https://www.allromanceebooks.com/product-rude-1804677-340.html 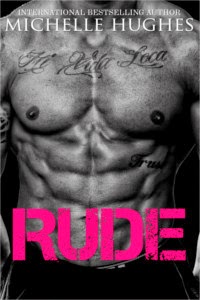 Sexy Twin Brothers.  One owns her heart, the other makes her burn.  Would it be RUDE to keep them both?

Liam walked into my world and turned it upside down with his lickable abs, bedroom eyes, and alpha male persona.  He was sin personified and I wanted him to damn my soul.  Everything about him drew me in, daring me to step outside my comfort zone and forget all the rules I'd made to keep my heart safe.  He was rude, vulgar, and promised everything a good girl dreams about doing with a bad boy.

As if his temptation wasn't enough, his twin brother was thrown into the mix.  Luke was Liam's polar opposite in every way, except for his panty-melting looks.  Charming, respectful, and a man you wouldn't mind taking home to meet the parents. There couldn't be a more perfect man.  Put the two of them together and it was a combination no woman couldn't resist.

I've never considered myself a prude, even though I was holding out for marriage.  How could I walk away from a night that fantasies were made of?  Liam told me that great sex was never boring.  It was dirty, passionate and a little rude. All I had to do was say yes.